IC lesson: Be Right, or Be Rich? 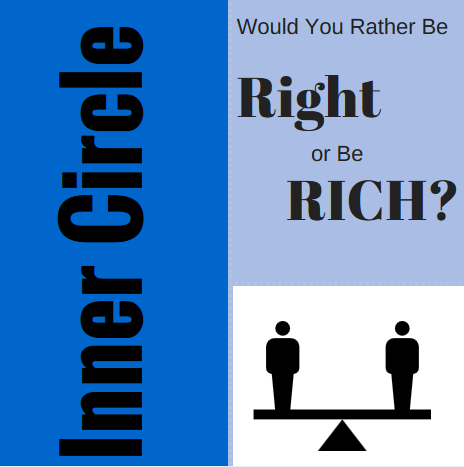 There’s an old piece of advice that’s generally given to husbands, in regards to arguing with their wives, that goes, “Do you want to be right, or do you want to be happy?”.

And the longer I’m in the wholesaling business, the more I realize that nearly the same piece of advice applies to negotiating with sellers—only it’s, “Do you want to be right, or do you want to get the deal?”

Don’t get me wrong: I have more than my fair share of gotta-be-right-ness. In my younger days, I often found myself debating with sellers about the “facts”—how much their house would sell for fixed up, how much their neighbor’s house sold for last week, what it would really cost to re-do the roof and gutters, and on and on.

Back in those days, I think I had some of the same psychology I see in you folks when you say to me, “I’m afraid to talk to sellers because I’m afraid they’ll be able to tell that I don’t know what I’m doing, and I’ll lose all credibility”.

This assumption that sellers sell to you because you’re smart, or experienced, or a bigger expert than they are about houses in their neighborhood, is just dead wrong.

The latter is what negotiation experts mean when they say “build rapport”.

And guess what slightly older, exponentially wiser me knows about building rapport, now that I’ve talked to 10,000 sellers or so?

Arguing, even if the seller is clearly, provably in the wrong, is not a good rapport builder.

So today, I NEVER argue with sellers. Instead, I try to gently lead them to understanding the realities of their SITUATION, which is more important than the “facts” anyway.

Instead, I say, “Huh, I was just looking at some houses that sold in that neighborhood, and I don’t think other people are getting those prices; what is it about yours that makes it worth more?”

Or, “Let me ask you this, is there some reason you don’t just make the improvements yourself and sell it for $150,000?”

Asking instead of challenging is much more useful is getting into the seller’s mindset. A lot of the time in a situation like this, it turns out that the seller is depending on the tax appraisal, or on the Zestimate, as a way of estimating the value. This allows you the opportunity not to argue, but to educate and suggest.

My automatic response when the sellers says that he’s based his value on what “the tax people” say it’s worth is, “So, honestly, if you fixed it up and put a sign in front of it, do you think someone would come along and pay you $150,000?”—and 75% of the time they’ll admit that they don’t believe that at all, and you can start talking about real numbers.

Sellers aren’t going to respect you more, or be more likely to sell to you, because you prove to them that you’re right and they’re wrong.

If you’ll take on the mindset that it’s better to build rapport than be right, you’ll find gentle ways to let sellers know that you don’t accept their assumptions or assertions, while still making the seller like you. Here are some more examples that I find myself using all the time:

Seller (typically a landlord): “The kitchen, bath, and furnace haven’t been updated in 50 years, but they all work great, and the roof is 25 but it doesn’t leak, so it’s basically in move in condition and you won’t have to do anything to it”

Me: “Well, I don’t know about you, but I’m getting lazier and lazier in my old age, and I basically like to take care of anything that’s going to NEED to be done in the next 10 years when I buy a house so I don’t have tenants calling me and whining about how it’s cold in the house or they don’t like the countertops. Know what I mean? So I’m guessing that even though the house doesn’t NEED work, I’m going to want to do some right away anyway”

Seller: “It needs walls,  plumbing, electric, roof windows, kitchen, bath, roof, furnace and central air. My brother in law is a contractor, and he says he can do it all for $12,000, so the house is a great deal at $xxx,xxx”

(This usually leads to the seller either admitting that his brother in law is an idiot, or that this was a labor-only bid, or that the BIL has never actually seen the property, and we can, again, start talking about real numbers.)

Me: “Well, I’m not sure if your shell in a warzone is going to buy that truck for you. Do you have a plan B for getting the truck if your house doesn’t sell for that?”

(This usually shakes the seller a little, but makes him actually consider what his other options are).

You get the picture—don’t argue, ask. Don’t make someone that you want to do business with you feel silly, or disrespected, or wrong. Even when you’re positive your right and that the seller either has his head where the sun don’t shine, or is crazy, or is lying.