For our inaugural Inner Circle/Express Success deal analysis, I’d like to share the strangest deal I’ve ever been involved with, as an example of the fact that, with a willing seller and enough creativity on your part, it’s almost always possible to reach terms that are profitable for you and satisfactory for everyone.

The deal, part 1: seller-held mortgage on a trio of rentals

How I found it: a mailing to out of town owners 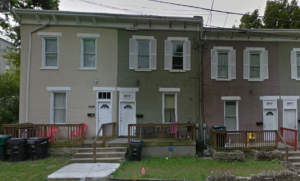 What the seller said: during out initial interview, the seller told me that he had purchased these properties sight unseen from eBay; he was not familiar with the area because he lives near Harrisburg, Pa.

He had paid cash for the townhomes. The 4th property had a mortgage with a balance of $46,500.

His main source of “pain” was his management company: the 2nd he’d hired in the 3 years he’d owned the properties. He had a laundry list of complaints, including that one of the townhome tenant had only been in the property for 4 months and yet hadn’t paid rent since the prior month; that the largest of the 3 townhomes (and the only one with off-street parking) was for some reason rented for $50 a month LESS than the other 2 units; and, most immediately, that the city had recently placed orders on the townhomes, demanding that the porches and soffits be repaired and part of the exterior be painted. His management company had quoted him around $6,500 for the work.

Since he had already put $10,000 or so into properties that he was told were turnkey when he bought them, he was ready to just get rid of them and move on. He was willing to sell the 3 townhouses for what he’d paid–$35,000 each—and the single family for the loan balance of $46,500.

When I heard that the detached home had such a high loan balance ($46,500 is about $20,000 more than I’ve ever paid for a property in Price Hill), I asked the seller whether he wanted me to consider the 4 properties as a package or separately, since having to buy the detached property would cause me to make a lower offer on the townhomes. In other words, because I was pretty sure I would only want to pay maybe half the loan balance on the detached home, I could actually pay more for the other 3 if I didn’t have to buy the 4th property.

He quickly decided that he’d be willing to hold on to the detached property to maximize the sale price of the other houses.

The evaluation: When evaluating what I can offer for a property, I look at several factors, including:

One thing I typically do NOT consider, because it’s not enough of a “sure thing”, is potential future appreciation. However, it should be mentioned that the 3 townhomes are in a part of the area called “the Incline District” that has had a lot of city attention in the form of development grants, tax abatements, committees to form committees to consider how to best redevelop it, etc. While the area immediately surrounding these properties has seen sporadic redevelopment, it would be fair to say that the area remains “potentially up and coming” rather than a hot area.

From my initial conversation with the sellers, I was able to determine that:

Comps in the area were primarily distressed sales—either sheriff’s sales or REOs—and were almost all detached homes, which in my area are worth at least 25% more than similarly-sized attached properties.

My best guess as to after-repaired value based on the comps and, just as importantly, the rents and expenses, was about $45,000 per unit.

Since my goal, at least initially, was to wholesale the properties, I did the usual wholesale math of:

How the negotiation proceeded: after the brief initial shock of hearing that I’d only be willing to pay $15k each for properties he’d paid $35,000 each for, the seller went into negotiation mode.

His first attempt was, “Why don’t you go take a look, they’re really in good shape”, to which I replied, “Look, even if they were perfect other than the exterior problems we already know about because, you know, building orders, I’d only be able to pay maybe $20k each for them. We’re so far apart that I don’t want to disturb your tenants, your property manager, or, honestly, waste my own time until we get closer to a meeting of the minds on price.”

He came back with, “Could you give me $65,000 for all 3? to which I replied, “Only if you make it super-easy for me by taking payments and on really easy terms, and even then, I’m not guaranteeing I can get that high if they need a lot of work.”

He said, “What do you mean good terms?” and I said, “I don’t want to get into exact numbers until I’ve seen the properties and figured out how much they’ll need to make them really stable, but if you’re willing to consider a 5-8 year payoff, I’ll go look at them.”

He did, and I did, and as I expected, the exteriors were not the only problem.

For one thing, the non-paying tenants were living in a unit where the turnover had never been completed before they moved in; the carpet was on the floor but not attached, and the paint on the walls stopped at a few inches below the ceiling, where one would normally “cut in” with a brush.

The tenant in the middle unit had no cold water in her shower—that’s cold, not hot—and had about $1500 in other inexpensive but important repairs to be made.

The tenant in the end unit—the one that the owner had wondered aloud about why it was rented for $50 less than the others—turned out to be one of the maintenance men for the property manager. Yes, the manager had given one of the manager’s employees a $50/mo. rent reduction, on the owner’s dime. Or his 500 dimes. Luckily, that unit was in decent shape.

So, I called the owner back and offered this:

After some hemming and hawing, the seller accepted. I created 3 separate purchase agreements and 3 separate mortgages (in case I wanted to sell them to 3 different buyers—I’d need to assign or wrap them separately) and we closed 2 weeks later.

The relevant language in the purchase agreement, reflecting the wording for the prices and mortgages, is below.

Because he had to turn over $1800 in security deposits and roughly $900 in prorated rents at closing, my actual money to the closing was around $400 including m What happened next: with this 0% financing in place, the obvious thing to do was to flip it with financing to a landlord who wanted livable properties with tenants (or 2 tenants, anyway) already in place.

I sold these properties on contract for deed (land contract) to a single buyer under the following terms:

Or so I thought.

The deal, part 2: trading my mortgage for another house.

Everything went along as planned for about 14 months, at which point I got an email from the same seller. It said:

“What can we do about my property on Seton? A new tenant moved in 2 months ago, and now I have Section 8 orders on the property that my manager is telling me will cost $4,500 to fix. I don’t even know how this happened, it passed inspection less than 60 days ago. I know you said you didn’t want to pay $45,000 for it, but what can we do?” 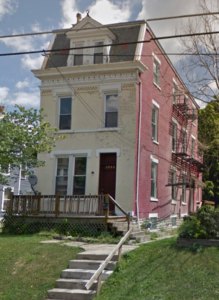 To which I replied;

“The bottom line is, the only way this property would be attractive to me would be if I could assume your loan, and then only if the loan balance was quite a bit lower than it is at the moment. How much money are you willing to bring to closing to pay down that loan?”

“Lol, I don’t have that kind of money, remember you already paid $50,000 less for my other properties than I did”

“You don’t have cash, but you do have an asset, and that’s the mortgage on the Incline District properties. Give me that and I’ll take over your loan on Seton without you bringing any money to the closing.”

At this point, you might be thinking, “WHAT??? How can she trade HIS piece of paper for HIS house, and what good does that do?”

That’s the interesting and instructive part of the deal, so let me walk you through it.

The seller has 2 things:

The details of HIS note were:

Normally, in a situation like this where the property had an appealing loan (5.75%? $498/mo. PITI payment? I’ll take a dozen, please.) but an unappealing loan balance and term, I’d ask the seller to bring money to the closing—in his case, probably $25,000—to pay off a sizable chunk of the balance.

Paying off a bunch of the principal doesn’t change the monthly payment on the remaining loan, but it drastically changes the term AND immediately makes more of that $298 payment principal by moving the amortization schedule forward by years and year.

However, in this case, the seller didn’t have cash to bring to the closing.

All he had to offer, in fact, was another asset: that mortgage and note that I’d given him on the first set of properties.

What I was basically telling the seller was, forgive and release the debt that I owe you, and I’ll take on the responsibility for YOUR debt by buying your unwanted property subject to it.

Now, remember, at this point what I owed him was quite a bit less than what I started with. By the time we actually closed, roughly 17 months into my payments on the Incline district properties, my balance was paid down by over $14,000.

My own plan was a little more nuanced than that; this property is really and truly not worth the $46,000 he owed plus another $10,000 in expected repairs and upgrades. It is NOT in the “up and coming” part of the area; it’s in a part that has been for many years, and that I’d expect to continue to be, a primarily low-income rental area.

So my plan was simple: once he’d “forgiven” the $36,000 debt in the first set of properties, I’d apply the $833.33/mo. payment I had been making on those to this property on Seton. In this way, I’d pay HIS loan down to zero in just a little over 4 years (if you’re having trouble with the mental math of that, think of it this way: in addition to paying the $298 each month the bank WANTS, I’m paying an extra $833.33/mo. every month toward principal. That’s nearly $10,000 in additional principal payments per year, on a mortgage balance that started at $46,000. Make sense now?)

What Happened: We closed. Now I have:

Positive cash flow of $1,028/mo. on the 3 properties I started with, since I owe nothing against them but still collect payments from my buyer.

Negative cash flow of $531/mo. on the Seton property, BUT I’m gaining more than $850 a month in principal reduction on it.

The Lesson: There are so many. Let’s start with—

Now, tell me: what’s your deal? Next month’s deal analysis will be a deal done by an inner circle/express success member. It doesn’t need to be fancy, or even a winning deal (sometimes the best lesson is what NOT to do!).

Just let me know that you have a deal you’d like to submit, and I’ll get the relevant details from you. When your deal is used, you’ll get a free copy of Mr. Drew’s Guide to Negotiation for the Real Estate Investor—a $399 value and a heck of an informative book.

Submit your deal to InnerCircle@theRealEstateGoddess.com now!