Lordy, people, there are SO many ways to put together real estate deals. SURELY there’s one out there that you’ll like/understand/benefit from.

If you don’t like full-on wholesaling—maybe because ugly houses repel you, or some of the areas that work well aren’t neighborhoods in which you want to spend time, or you don’t like making super-low offers—then learn how to do creative deals, and flip those. P.S. Those of you who are smart enough to come to the National Real Estate Summit   in a couple of weeks will have the chance to learn a lot more about this from Jim Aydellotte, who makes $10k-$15k a month flipping pretty houses.

Creative financing techniques—buying properties using seller-held mortgages, contracts for deed, lease/options, and subject to the existing loan—are usually thought of as ways for you, the buyer, to control real estate for some period of time so that you can exercise some exit strategy that requires control.

For instance, you might buy a property subject to the existing loan so that you can renovate it and rent it for the long term. Or you might get a “split funds” seller mortgage for a year because you intend to renovate and resell the property within that year. Or you might control the property with a lease with option to buy so that you can sell it with a lease with option to buy (with, of course, a higher overall price, higher down payment, and higher monthly payment coming to you than the ones you’re paying).

But, if done carefully (by which I mean with the right people, full disclosure, and all the contractual ‘i’s dotted and ‘t’s crossed) creative deals can also be ‘flipped’ in much the same way that simple purchase contracts are flipped—for quick cash, and with no further involvement or ownership by you.

There are actually 2 different structures under which creative finance deals are used to generate profit. The more common concept is the “wrap”, where you “stay in the middle”, obligating yourself to make payments to the seller with one contract while creating a separate agreement with YOUR buyer at a higher price and payment.

Although the “sandwich lease” is probably the most talked-about “wrap” strategy, almost any creative finance deal, when correctly documented can be wrapped with either a sell strategy that’s equivalent, or one that represents the giving of a LOWER (but not HIGHER) level of interest to the buyer than the one you received from the seller. In other words, if you used  strategy wherein you RECEIVED title to buy, you can generally use one where you GIVE title or a lesser interest, such as a lease with option to buy, to sell. 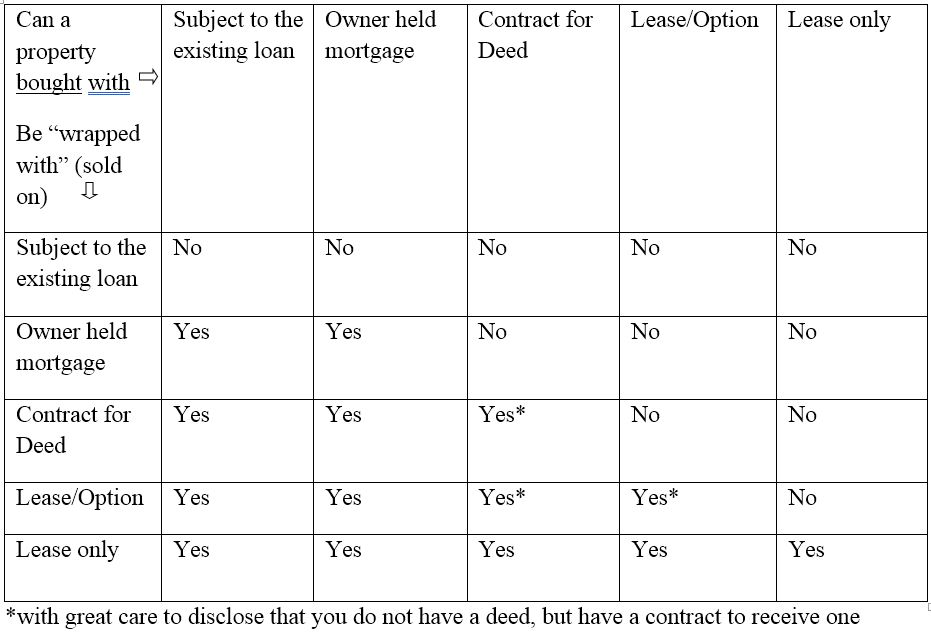 However, our topic is not how to “wrap” financing, but rather how to “flip” it—or, to use the correct term, “assign” or “novate” it.

(The difference between an assignment and a novation is important: in an assignment, seller is simply notified that the buyer—you—as been replaced by another buyer. In a novation, the seller AGREES TO the replacement, thus releasing the original buyer—you—from any obligation in regards to the agreement. Any contract is assignable as long as there is no wording stating that it isn’t; however, a simple assignment of a document that you have already signed, such as an owner-held mortgage, results in you continuing to be held liable for the terms of the agreement if the new buyer fails to meet them, unless there is novation language in that document that says that the seller automatically agrees to accept any new person you choose as the obligor in the agreement. Need I say that what you REALLY want to do is to novate, rather than assign, your agreements?)

In this strategy, the entire agreement, with all of its rights and obligations, are given to the ultimate buyer in return for a single, cash payment to you. The most common example is the “lease/option assignment” (really a “lease/option novation”, if the paperwork is correct—see footnote). In this strategy, you might agree to lease/option a seller’s property with $0 up front, $1,000 a month for 10 years with a $100,000 sale price. Then you simply assign the entire lease/option deal to a new buyer for $110,000 with $10,000 up front and payments of $1,000 a month for 10 years, replacing yourself in the contract with the new buyer for a one time, up-front fee of $10,000.

In a creative finance ‘flip’ deal (we’ll refer to these deals in this way for the remainder of this discussion in order to avoid writing ‘assignment/novation’ each time), you generally get 1 payment, up front and in cash, and ‘step out of the deal’, leaving your buyer to fulfill your obligations to your seller. There is only 1 contract at the end of a creative finance flip—one between YOUR buyer and YOUR seller—not 2, as in a wrap situation. And in a creative finance flip deal, you are always handing your buyer exactly the same terms and type of interest that you received or negotiated.

There are a number of legal and, just as importantly, ethical considerations in flipping creative finance arrangements.

Unlike wholesaling purchase agreements, where the deal is pretty much done following the closing, creative finance arrangements commonly continue for months or even years following the official consummation of the deal. It’s this ongoing relationship you’ve created between the buyer and the seller, and the fact that the situation of either might well change over time, that makes it especially important that you understand the ramifications of the arrangement if it goes wrong in the future.

In order to shield yourself, the buyer, and the seller from liability or loss to the extent possible, it’s important that you do the right deals with the right paperwork and disclosures with the right parties—and that you yourself understand the legal and financial ramifications of one party or another defaulting on the agreement you set up, got paid for, and then stepped out of.

First and foremost, then, it’s your responsibility to make sure that you fully  understand the deal you’re getting other people into, and act responsibly in the way in which you arrange these deals.

By act responsibly, I mean have an attorney who is extremely familiar with the strategy you’re using and the required paperwork prepare the documents. I mean have a real closing between the buyer and the seller at a real title company or attorney’s office, with all the necessary recordings, tax prorations, and disclosures done by an expert. I mean recommend the both the buyer and the seller that they also get legal counsel of their own so that they fully understand all the possible risks and pitfalls of the deal.

And even with this belt and suspenders approach, it’s important to understand that there are several predictors of the long-term success of deals you’ve assigned, including

For instance, if you assign a subject to deal to a buyer with terrible credit, it’s nearly a sure thing that he will default on the SELLER’S loan and ruin the seller’s credit, as well. The same deal would be much less risky to the seller if it were done as a lease/option assignment, since the seller could simply evict the non-payer. On the other hand, if it were the seller who was nearing bankruptcy, taking $20,000 down from a buyer in a subject-to assignment puts the buyer’s significant down payment at risk, as a seller bankruptcy might result in a foreclosure against the property even if the buyer continued to make the payments. What would mitigate this? If the buyer were an experienced investor who fully understood the seller’s financial position and was willing to risk a seller foreclosure, because if necessary, the buyer could pay off the loan prior to foreclosure.

This may sound like “situational ethics”, but the simple fact is that it’s a different thing to assign an seller-held mortgage when the seller is an 80 year old widow who absolutely MUST have the $500/month payment to stay in her apartment (and doesn’t have the financial resources to foreclose should the buyer default) than it is to assign the seller-held mortgage of a multi-millionaire attorney for whom $500 a month means little.

Do Good Deals, But Disclose the Risks

Ultimately, the way to avoid liability is to assign only deals that are good for the buyer, good for the seller, and likely to be successful for both. It’s good business and good ethics to avoid transactions where you are the only one who’s likely to come out ahead as a result.

Nonetheless, even with the utmost care on your part, stuff happens. People get ill, they get divorced, they get transferred, they lose their jobs and run into financial problems. Thus, as the final step in any assignment deal, you should disclose, in writing, any and all risks related to non-performance by the buyer AND the seller, and have all parties sign and agree that they understand and accept these risks, and that they will hold you harmless if any of these unfortunate circumstances come to pass.